COVID-19: All of our online courses are still available and can be completed under current restrictions. EOT is committed to providing unchanged quality service during the current crisis. There have been no changes to course eligibility, refund policies, or course requirements.

8 Steps You Can Take To Avoid Drink Spiking

It’s really important that everyone is aware how to avoid drink spiking. Regardless of who does it and what their motives are, drink spiking is against the law and the consequences for those who commit this cowardly act are heavy fines and incarceration ranging from two to 25 years. Drink spiking is not always a prelude to further crime, although it definitely can be, and can be perpetrated by a friend playing a joke, or a stranger with ulterior motives of a sexual or violent nature. 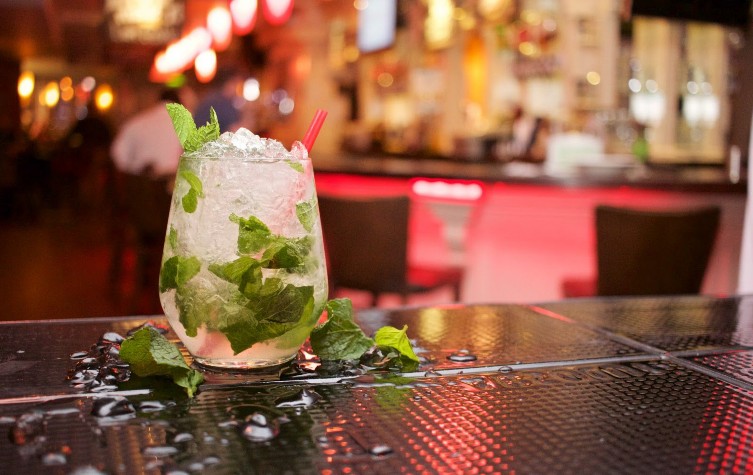 What is drink spiking exactly?

Drink spiking can happen anywhere, and is not restricted to pubs, clubs, nightclubs and parties. It can happen when there are many people around in a public place, or between two people in a private residence. Drink spiking is the act of adding drugs or extra alcohol to someone’s drink without their knowledge or consent. Contrary to popular belief, drink spiking is not restricted to illicit drugs and alcohol. Over the counter drugs mixed with non-alcoholic drinks such as soft drinks, coffee and water are just as effective in causing the intended recipient to lower their inhibitions, become disoriented, or unconscious.

What are the symptoms of drink spiking?

Drink spiking drugs can be colourless and odourless, although not always, so it can be difficult to tell if your drink has been spiked by sight or smell. Therefore your actions and how you feel are the best ways to determine if you may have been the victim of a spiked drink. Symptoms of drink spiking include:

The severity of these symptoms will depends on a range of factors such as your age, size, weight, the amount of alcohol you’d drank before ingesting the drugs, and the drink spiking drugs that were used.

Different drugs have different affects on people including drowsiness, unconsciousness and euphoria. They can be common, illicit or over the counter drugs, and depending on the type and amount consumed, can have dire consequences including death. These include:

What can I do to avoid my drink getting spiked?

The majority of people who have their drinks spiked are women who don’t believe they are at risk. However the risks are very real, and anyone who isn’t vigilant could be a victim.

Here are 8 steps you can take to give yourself the best chance of avoiding a drink-spiking incident:

If you have any fears about your drink or what it may be doing to you, find a friend or member of staff (if at a public place) and ask for help. Also, if you witness someone else’s drink being spiked, notify management or call the police immediately.

What are the responsible service of alcohol (RSA) guidelines?

If you work at a bar, restaurant, nightclub or any other venue that serves or sells alcohol, you have a responsibility to your customers. You must be aware of your surroundings and act should you witness anything untoward. For example, should a patron order drinks with extra shots of alcohol in them, you must make a RSA judgement call. You must ask yourself “who are the drinks for” and “what is the reason for ordering them”.

All venues should have RSA guidelines and every staff member must be made fully aware of what they are, and what the consequences can be if they are not adhered to. There are several steps you can take to protect the health and wellbeing of your customers, and yourself legally, should anything happen, such as:

Don’t be afraid to ask questions of people helping inebriated or intoxicated people to ensure they are trusted friends. The best thing you can do is serve alcohol responsibly and report suspicious behaviour to management.

Complete your RSA course (SITHFAB201 – Provide responsible service of alcohol) online or by correspondence now and obtain your competency card without delay!

8 things to check when choosing your online training provider.

If you find the same course for a lower price we will beat it by 10%.

We are now providing student support until late, not just the industry standard 9AM-5PM.

We have now overhauled our site to work perfectly with most tablets & phones.

You clicked on our

Thanks for visiting our site!

Every time someone clicks on one of our Google Ads it costs us around $5.

If you think you might come back please help us out by "bookmarking" our site, or making a note of our address "www.eot.edu.au" so you can return, and we can keep prices low for yourself and others.

This course is currently not available.

Sorry, There's Been an Error

Express Online Training can enrol persons into nationally recognised courses who are from Australia or any other country, as long as they are not considered to be an “Overseas Student”.

An “Overseas Student” is defined in the ESOS Act 2000 as a person (whether inside or outside Australia) who holds a student visa (as defined in regulation 1.03 of the Migration Regulations 1994).

This includes the following subclasses of visa:

excluding persons who satisfy the secondary criteria, but not the primary criteria, under the Migration Regulations 1994 for the grant of the visa, or a secondary exchange student within the meaning of the Migration Regulations 1994, or an overseas student who has been approved under a scholarship scheme, or an exchange scheme, sponsored by the Commonwealth to undertake a course of study or training in Australia.

Any person who is not an Australian citizen must have their visa status verified before they can enrol in any nationally recognised course. This check requires the submission of the person's passport/immiCard number and country of issuance, which is then verified automatically using the Department of Home Affairs' VEVO system.

To complete this assessment you will need to have the following Learning, Language and Numeracy (LLN) skill levels: 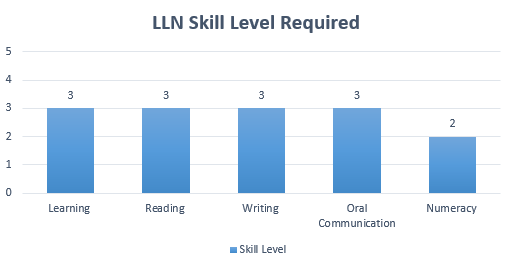 If you are not sure whether your LLN skill levels meet these standards you can use our LLN Self-Assessment Tool.

If you feel you may need assistance with your training, or have any questions please contact us.

According to the Western Australia Department of Mines, Industry Regulation and Safety (DMIRS) Terms and Conditions, before any training organisation can issue any learner a WA Construction Induction Training Card (White card) we must obtain evidence that learners were located in Western Australia at the time of the assessment for this course.

Before being issued with a WA White Card learners will be required to provide one of the following types of evidence:

Learners can submit this easily by uploading a good quality photo or scan of their document to their EOT account.

According to the Queensland Office of Industrial Relations Terms and Conditions, before any training organisation can issue a learner a QLD Construction Induction Training Card (White card) via online training, we must obtain evidence that learner resides in Queensland, and at a distance of 100 kilometres or more from any RTO offering face to face delivery of the CPCCWHS1001 (White Card) course.

Before being issued with a QLD White Card, learners will be required to provide one of the following types of evidence:

Lodge your application by taking the following documentation to a Service Tasmania Shop and paying the appropriate fee:

EOT will provide you with the application form and the Statement of Attainment (certificate) upon successful completion of all the course requirements.

An application for a construction induction card must be made within 60 days after the issue of the training certificate.Â

Service Tasmania will review the documentation and forward it to WorkSafe for processing. If you do not receive your card within 60 days from lodgement, you will need to contact WorkSafe.

Personal information disclosed to NCVER may be used or disclosed for the following purposes:

You may receive an NCVER student survey which may be administered by an NCVER employee, agent or third party contractor. You may opt out of the survey at the time of being contacted.

NCVER will collect, hold, use and disclose your personal information in accordance with the Privacy Act 1988 (Cth), the VET Data Policy and all NCVER policies and protocols (including those published on NCVER's website at www.ncver.edu.au).

As of July 2019, new conditions from WorkSafe will affect your eligibility to complete the White Card course online.

All staff and learners are expected to maintain high standards of academic honesty and integrity.

General misconduct is where a learner acts dishonestly, harasses other learners or staff, interferes with students or staff, prevents or disrupts the learning of others, disobeys/fails to comply with contractual or legal requirements, damages or steals EOT property or Intellectual Property (IP) or the property of others, alters, defaces or improperly accesses EOTs documents or records, prejudices the reputation of EOT or otherwise acts in an improper manner. General misconduct includes the misuse of any facility in a manner which is illegal or which is or will be detrimental to the rights or property of others. This includes the misuse, in any way, of any computing or communications equipment or capacity to which the learner has access.

Academic misconduct is defined as any attempt to cheat, falsify, plagiarise or otherwise act dishonestly in undertaking an assessment task, or assisting other learners to do so. This includes any attempt to gain advantage from unauthorised possession or use of EOTs learning or assessment materials or other intellectual property.

Learners may be accused of cheating if they seek to gain advantage by unfair means such as copying another students’ work, or in any way mislead or deceive a trainer/assessor about their knowledge, identity, ability, or the amount of original work they have done. Cheating can include collusion or plagiarism or any other method of presenting the work of another person without acknowledgment or referencing.

For the purpose of assessment preparation and submission, learners are not permitted to work in collaboration with others.

Any person accused of misconduct are regarded as innocent of the alleged misconduct until they have either admitted to it or been found by proper inquiry to have so behaved.

Where general or academic misconduct has occurred by a learner, EOT will take disciplinary action. This action may include, but is not limited to:

Learners are notified in writing of penalties as a consequence of any misconduct. The grounds for appeal are:

Appeals must be lodged in writing with the Training Operations Manager by writing to appeals@eot.edu.au within 20 days of the date of the learner being notified of the penalty. The appeal process commences within 10 working days from the date of receipt of the learner’s appeal.

The process for making an appeal depends on the nature of the alleged misconduct and may require one or more of the following:

In the event that a learner has engaged in academic misconduct or general misconduct and the penalty includes cancellation of enrolment resulting in the learner being unable to receive the unit of competency, and/or exclusion from other EOT courses, EOT will review the offence to determine if there are grounds for a refund.

The AUSTRALIAN INDUSTRY REGULATION UPDATE SERVICE monitors the relevant industry skills councils, state and federal regulators, and associations and other relevant stakeholders. Information on the latest changes to laws, regulations, requirements and fines are then provided to workers in a concise, easy to understand format via INDUSTRY.HELP AUSTRALIA.

Over 30,000 new members every month sign up with INDUSTRY.HELP AUSTRALIA in order to stay current on important information, saving them time, effort and reducing their risk.

Express Online Training is able to offer its students a special deal where you can access INDUSTRY.HELP free for one month, as well as receive a heavily discounted membership rate.

REGISTER
THROUGH US
(RECOMMENDED)

If you need to complete your Audio Assessment urgently you can call in and complete the final questions with an assessor.